Sorry we were late with this issue, but work, illness, technical difficulties, and Brian's hit-and-run got in our way. See?!?:
Legit, Brian is not hurt, but the sucka what did it got away like a thief in the night. If he was a terrible wrasslin' gimmick, he'd be the Hit-And-Runner, and he'd suck.

Some of our favorite 90s bands came out with, or are coming out with new albums:
Cryptic e-mails from Tom Delonge to Hillary Clinton's campaign manager about Area 51

Channel Zero on SyFy (is it still called that? Gah)

What is best in life? 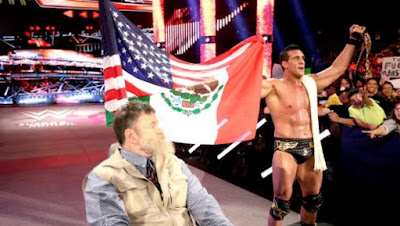 WCW's answer to those video gaming things the kids are into: Glacier

And what would become Glacier's MORTAL enemies (Get it? MORTAL? Get it? Yeah, yeah...), Wrath and Mortis!
The Dudley family (ECW) 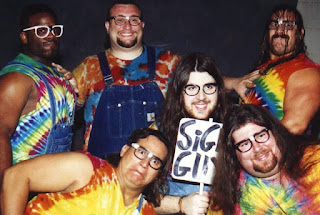 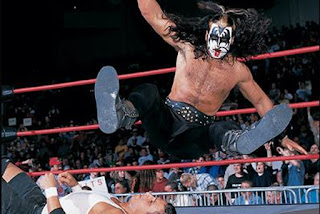 Yup, Gene Simmons owns the trademark for this:

KISS not rocking out, and without makeup on:

Ok, back to wrasslin'. Lightning round!!!
Boogeyman meets Donald Trump. Cause I just had to:

Seriously, though. This clown nonsense is ridiculous and dangerous.


And another moment of greatness from WCW:
But at least we got "Rap Is Crap" out of it:

Making it work:
Getting the pop of the night at Wrestlemania 31

And finally, Brian hates The Miz cause of this:

But Casey loves The Miz cause of this: