One of the most anticipated episodes of any show ever finally delivered the answer to the question of "Who did Negan kill?"

Yes, The Walking Dead managed to both get everybody's guess right (Abraham) and then completely pull the emotional rug out from under us with the original comic death of beloved Glenn.

With sad hearts, let's get to the guide!

Brian recommends The Ranch on Netflix. Here's the opening song: 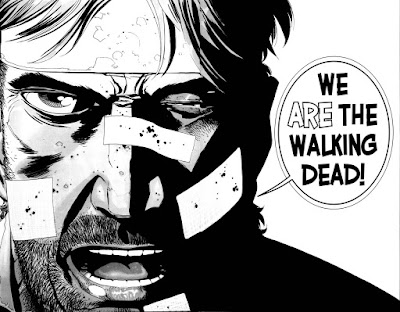 A link to show how much money young, dumb Casey lost by walking away from Walking Dead #1.

Robert Kirkman - comic nerd makes good, then great. Kirkman had to lie about the concept of Walking Dead to even get Image Comics to publish it because they didn't want to publish "just another zombie story." He said it involved aliens. But they never showed up. Now Kirkman is a partner at Image comics.


At least there are some fun times ahead on the Walking Dead. King Ezekiel and Shiva:


Back to gore and darkness; Noah's death:


Sophia:
If you want to see how Lori dies in the comics, click here. Probably the most shocking sequence in a comic full of them.

Speaking of shocking, read about scenes in the comic that either will not or HOPEFULLY will not make it to the show. I blocked out so much that the Governor did.

Judith, LAK. I'd be down with this:
Michonne:
Negan:
Speaking of barbed wire bats, wonder where they stole that idea from?
So back to the end of last season's episode. The cliffhanger that brings us back to the top:

Which was soooooooo much better than:
And to end this dark, depressing post on some high notes:

Walking Dead as a 90s show: