On the evening of February 28, 2017, I had the privilege of seeing one of my favorite bands, Jimmy Eat World, live at the Vinyl Music Hall in Pensacola, FL. Opening for them was an eccentric band call AJJ, hailing from Phoenix, AZ, like Jimmy Eat World.

AJJ was a talented group of musicians with the energy of three Kindergarten classes. They were a great band to hype up the crowd for the headliner. It was a smart choice for Jimmy Eat World to bring them along. Being that hey are also from Phoenix it makes me happy to see the guys supporting other locals bands.

Over a year ago I got the chance to see another one of my favorite bands, Mae, at the same location. For my own enjoyment I decided to write down (type in Notes on my iPhone) the set list so I could create and listen to a playlist with the same order of songs enabling me to relive the concert at my leisure. I decided to do the same thing at this concert.

Below is a screenshot of my actual playlist and the order of songs played by Jimmy Eat World on that night in February. They played for nearly two hours, playing 24 songs. From what I've seen and read in press for this tour, Jimmy Eat World is mixing up the set list for each tour date. Therefore each set for each venue would be different. What that also means is that this playlist, this set list could be unique in song selection. For me, a total music geek and sold-out Jimmy Eat World fan, that makes this list of songs special. 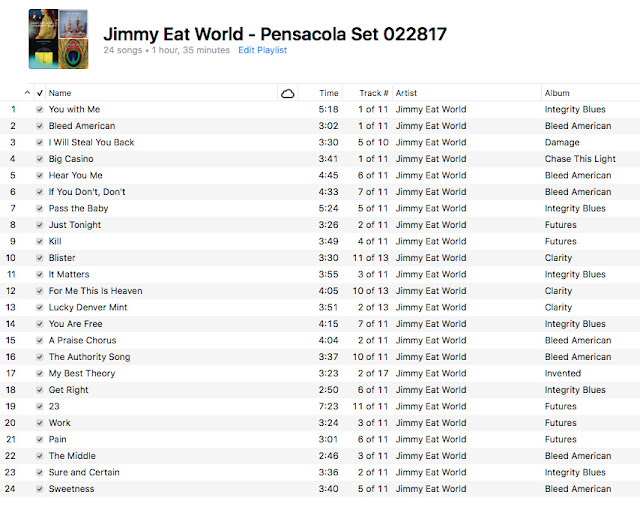 On a side note, it was interesting for me to observe the stage after AJJ had finished playing. One their gear was moved off of the stage, all that remained was a drum set, keyboard, four boom stands with mics, and four digital pedalboards - no amps, no cabs, no tangled cables... the stage was very bare. I was so curious to see a band like Jimmy Eat World with no amps on the stage. Turns out the guys have switched recently to running their guitars through AXE Effects, elminating the need for amps and cabs, and enabling them to create an individual set of effects for every song that they play. It was amazing to see this system at work and I was very impressed with how great it sounded. As an all-analog guitar player myself, I've been very much anti-digital for over a decade. But this AXE system has got my interest peaked. Here a video that interviews two members of the band and explains how their AXE Effects system works: https://www.youtube.com/watch?v=5joX1ar0Ohk. -B
at 9:25:00 PM