Reading the X-Men: Age of Apocalypse Part One

I got a lot to say, so I'm going to break this up into parts and end each one with a cliffhanger.

I was in 8th grade when the mega crossover Age of Apocalypse came out. I particularly remember being in the hospital for the one and only time in my life (so far, thank goodness) and you had to pay to use their TVs there. Such BS. Anyway, it just so happened I had a stack of the first two issues of all of the AoA series which I read and reread and reread again. That got me through. And now here I am rereading some more over two decades later.

It was Wizard magazine that first spread the news. See, online comics journalism wasn't a thing back then. Some would say it really isn't much of a thing now. Fake comic news! Ok, so The Comics Journal wasn't exactly on any shelf or spinner rack in a 200 mile radius of Possum Hip, MS. Not that TCJ would or did necessarily report on Marvel's merry mutants and their x-over ways. They may have, but my point is that any news we got about comics in Granny Poot, MS, came our way through luck having it that the local Kroger and/or Piggly Wiggly got in Wizard on a random Friday.

What they said was they had heard through the rumor mill was that Marvel was thinking seriously about canceling their mega-money-making-mutants. At that point they had 9 regular ongoing series - Uncanny X-Men, X-Men, X-Factor, X-Force, Generation X, Excalibur, Wolverine, Cable, and the quarterly anthology X-Men Unlimited - this may or may not be important later. Besides the obvious stupidity of Marvel canceling the best selling comics they had by a far margin, young 13-year-old me didn't quite grasp how dumb a business idea that would actually have been. I was just ticked that Generation X had just started and won my heart and was now being considered for the chopping block?!? No stinking way, Marvel!

But then it came to pass that Marvel had instead put out this rumor (only to Wizard?) to get people talking. It was a strange bit of marketing that 1) would not have worked had internet been more prevalent then and 2) paid off like a mofo. Finally word came down that Marvel would indeed be canceling their 8 X-Men-related comics and replacing them all new titles ostensibly by the same creative teams.

And they put out some awesome ads and teasers, which made readers believe Professor X was being assassinated in (then) current time leading to some horrible world: 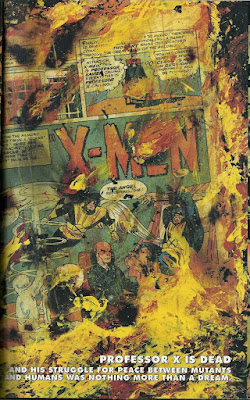 This promotional poster (below) by Dennis Calero was especially shocking to young me due to the darkness and the sharp changes in looks of some of the characters. This is the one that made me most excited for AoA, and I don't think I've been as excited for a comic crossover before that or since then. Strangely I had the hardest time finding this image online. I spent probably an hour and a half searching high and low on the WorldWideWebs. Couldn't find it. So forgive the poor quality of this scan-and-paste job I did. The AoA Omnibus was the only place I could find it: 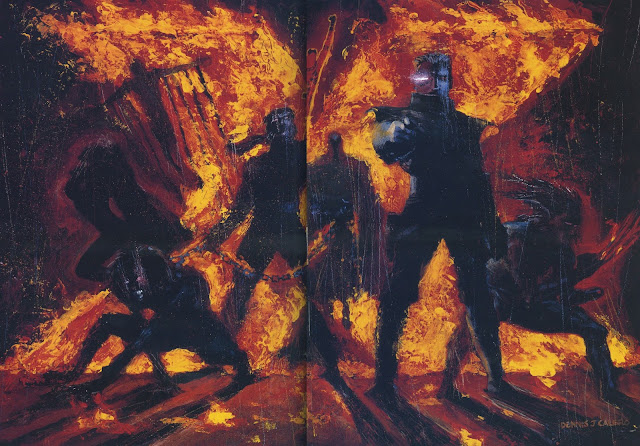 Knowing the characters now, it's obvious who is who, but I remember sitting with my friends and trying to figure out who each shadowy figure could be. Wolverine being the most obvious, but Cyclops without an eye was beyond our imagining at the time.

What we as readers found out eventually was that this was an alternate timeline and Marvel was just swapping the ongoing titles with minis that would make up the bulk of the main crossover. This was bold for Marvel in the 90s who made it a point not to try anything experimental or new in any way whatsoever. Thus leading to diminishing sales and bankruptcy at the end of the decade. But this was something no mainstream published had attempted and it drew big money.

So the story goes that David Haller, called Legion - who is now the star of an amazing FX TV series - goes back in time with the intention of killing Magneto to allow David's father, Professor Xavier, the chance to work on his dream without the obstacle of Magneto in his way. But, whoops! He accidently kills his deadbeat papa instead. Magneto goes on to poorly defend Xavier's dream of mutants and humanity coexisting peacefully which allows Apocalypse to run roughshod over the planet and turn it into a post-apocalyptic nightmare but with Apocalypse still actually there. So, not a post- at all. Just an Apocalyptic nightmare. Full of Apocalypse. Lots of the guy. Making it an age of Apocalypse, let's say.

But let's forget the paradox of Legion killing his father before Legion was even conceived. Let's also forget the scene where Legion changed his appearance to look like his father and then - maybe? - got it on with his own mother.

Marvel opened their crossover with X-Men Alpha featuring a shiny and colorful chromium cover which highlighted just how dark and dangerous and edgy this new world is.

The cover art was by 90s superstar video game player and occasional comic artist Joe Mada...Mader...Sienki...Madureira. The interior art was by Roger Cruz, whom Joe Mad got mad at for swiping his art style and copying his images. For realz, look at this bit from Joe in an issue of Uncanny from later in the year: 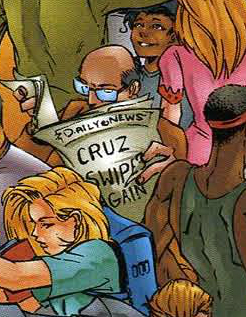 Previous crossovers had little numbering systems on the covers that conveniently told you which comic to buy read next in the story. Not so with AoA. They individually as mini series worked on their own but carried plots elements from the overall story. Some of the titles interweaved (interwove?) some, but for the most part they stuck to their own little hellish corners. X-Men Chronicles told some of the history that lead to where we were in the present, and another original title called X-Universe told the tale of some familiar humans dealing with one of Apocalypse's Four Horseman, Paul Roma Mikhail.

Only to find out that he was in fact...his own grandmother!