Ok, so what had happened was Lobdell wanted this big cosmic entity, but when the big white entities adorned Jim Lee and Rob Liefeld with four properties that would one day make Marvel billions (ok, except Fantastic Four) the call was made to change Lobdell's plans. Thus were the seeds planted for X-stories by editorial fiat rather than creators.

Bobby Harras and Lobdell hashed the shiz out and decided to turn this unseen threat that had been pounding the X-folks in their various titles for a year+. Oh, and that's 9 ongoing series at this point. What was going to be a completely new creation became a 'whodunnit' that turned out to be a traitor to the X-Men: Professor Charles Xavier.

They combined several storylines from previous years including the traitor angle where Bishop was trying to figure out who would betray the X-Men (he believed it was Gambit), as well as the story where Xavier turned off Magneto's mind. They even dropped in a panel from an old, uncomfortable Lee-Kirby joint where Xavier proclaimed to himself his love for his then-teenage student Jean Grey, to make it seem Xavier isn't without his flaws? I dunno:

Then combined with the need to get the Avenger types away from the regular Marvel universe they mix and matched all this into the concept that when Xavier wiped Mag's brain clean, an evil bit of Mag's soul clenched onto Xavier and slowly formed an entity made of the both of them and that's how super-villain babies are made.

What's weird is that there was a precedent for an 'evil' Xavier in the terrible X-Men and the Micronauts mini-series from the 80s. 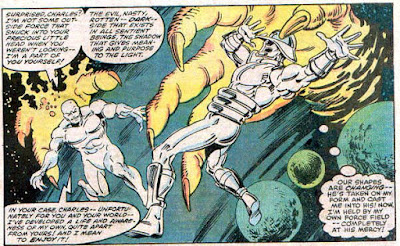 And they didn't bother using it. I mean, that's basically the beginning of Onslaught right there. That series even had TWO really uncomfortable sexual storylines involving Xavier and his minor students.

So they stretched the storyline across all the X-books, most of the Avengers books, FF, even some Spidey books and Punisher. What was once a straight forward and somewhat interesting mutant related story was now a clusterfudge nightmare both sloppy and icky. Aspects in one book weren't carried over into other books, characters weren't consistently written OR drawn, and Onslaught's motivations and goals (not to mention his design) seemed to change in every issue. Sometimes on the same page!

And don't even start me on where all the characters were at during this point in their lives. Oh, you do want me to start? Ok. Wolverine had turned into a monstrous animal thing without a nose and was hanging out with Elektra. Spider-Man was a clone who readers had been told was the real Spidey. Iron Man was teenage Tony Stark brought to present time from the past. Wasp was...not sure what was going on there. Magneto was young and an amnesiac, soon to be revealed as a clone. Cable was two different dudes from various time lines. Punisher was a member of the mob (I think). Thor never wore a shirt. Green Goblin had his own series for Bob's sakes. And Captain America had been through one of my favorite runs of all time (Mark Waid and Ron Garney) only to be set up for Rob Liefeld to do this to:

If this column is confusing and haphazard, well welcome to the Onslaught story.

What was most irritating was EVERYBODY was talking about what a saint Xavier was, what an amazing man, what a glorious icon of purity and effervescence. Vision, Cap, Reed Richards, every X-man. Talking about Prof. X as though he was Mr. Rogers himself. How could this beloved jewel of morality and greatness become such an evil thing as Onslaught?!? It got to be a little much during AoA with talk about 'the dream,' which is something that seemed to overwhelm the 90s X-themes. It got tiresome reading it over and over and over, especially during Onslaught when it's clear Xavier's bad decisions meant the death of many people and further subjugation for his people. Ugh.

And, oh my lord, if hearing all that crap about Xavier wasn't enough. If I read one more comic about psionic powers and telepathy, and beings of pure psychic energy, and the astral plain... Oh, you mean I have thousands more X-Men comics to go talking about that trash? Yay.

So the plot was: Onslaught attacked, kidnapped Franklin Richards and X-Man, built a big tower in Central Park, unleashed Sentinels on New York, and then did nothing for a bit. The heroes all got together and mumbled about psionic crap for a while then all the non-mutants ran into Onslaught's body and the X-Men shot him. All the heroes died and the X-Men looked like they were to blame. The end.

- What do super-villains do in their giant citadels? Onslaught just hung out in the top of his. Apocalypse during AoA mostly stayed to his throne room. What else was going on in the rest of it? Were there apartments? Kitchens? Bowling alleys? Where did Onslaught sleep? Did he have a bed or just kind of nod off mid-proclamation wherever he was?
- There were a lot of time-displaced characters around this time. Seriously. People get irritated at Marvel for it now, but they've been doing it for decades. Cable, X-Man, Tony Stark, Bishop, Dark Beast, Reed Richards' dad. Heck, Franklin Richards had only just come back as a child, as he'd been a teenager from the future for a little bit in the FF comics.
- There were some cool team-up moments pairing characters that had never really been together before. Cap and Gambit, the previously mentioned Wolverine and Elektra, Cable and Hulk, X-Man and the Avengers, Cable and Sue Richards. Even some fun old pairings popped up like Human Torch and Iceman.

*Quick review of one of the issues: Cable #35 (Jeph Loeb and Ian Churchill)*
This is about one of those pairings I just mentioned, Cable and Sue Richards. Sue's son Franklin, having been taken to the future as a little boy, returned as a teen, then switched back again, has now been kidnapped YET AGAIN. This time by Onslaught. So she and Cable decide they'll storm Onslaught's Central Park penthouse and try to rescue young Franklin. Apocalypse pops up and decides to help them out, only to try to grab Franklin for himself, or kill him or whatever.

At first there's a kernel of an interesting idea here. Sue is facing the fact that evil super-villains have kidnapped her son, while Cable is himself the son of super-heroes who was also kidnapped by super-villains. So Cable could be all like, "No, I mean, I'm cool and all. Got big guns, robot arm, gonna be in a GOOD movie one day. But, nah, might not want something like that to happen to your kid, too."

With the footnote being "And Franklin Richards was kidnapped YET AGAIN."

Then Apocalypse, the villain who actually did the Cable-napping when Cable was a wee baby, pops up and declares some stuff. I don't know what he was saying. A bunch of crap about destiny and Cable gets all up in his face about his destiny. Then Sue just tells them to chill. Apocalypse and Cable shoo off saying it would be best if Sue stayed behind. Cable sends Sue a 'secret' telepathic communication so Apocalypse can't here it wherein he tells her the same thing exactly, only in her head rather than her ears. This is important because it's stupid, and gets dumber later.

Apocalypse and Cable teleport into Onslaught's joint DIRECTLY IN FRONT OF HIM, to which Apocalypse goes: 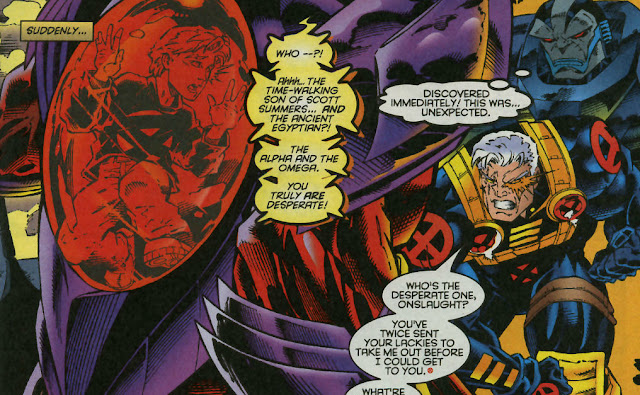 Yes, appearing out of nowhere directly in someone's eyesight would make them discover you fairly immediately. Hell, even if they were blind I'm sure they'd notice something with similar immediacy. Yet, Apocalypse is astounded by Onslaught's keen observational skills. How did this guy live so long?

Ok, now, see that kid up in that red bubble? That's Franklin. He is currently residing on Onslaught's back like a pimple. Instead of fighting Cable and Apocalypse, Onslaught creates some villains out of his mind that C & A have to fight. And I guess Onslaught justs decides to turn his back the rest of the comic while all this fighting is going on? I mean, cause that's what he does.

Oh, lord, it's just layers and layers of stupid in this comic.

And this is where the stupid from earlier returns. See, Cable knew that Sue had actually come with him and Apocalypse, yet stayed invisible because Cable knew 'Poc would betray them. She was going to appear at that moment to give the good guys the upperhand. In fact, they had made the plan when they were telepathically communicating earlier. Except Loeb didn't bother showing this at all. He showed them mentally talking, the whole conversation. So I guess they were having a secondary secret mind-talk that was even secret from the readers.

Mind you, this is all going on directly behind Onslaught's back. 'Poc tries to pop the Franklin pimple and Onslaught doesn't do anything. Sue shows up, and Onslaught is still chilling. Cable and 'Poc start fighting and he's still sitting there. It's not until Sue tries for Franklin that Onslaught even does anything when he just says "no, be gone" and teleports them all away. And he never moved. This is hands down one of the dumbest comics I've ever read. And I've read many, many, many dumb comics.