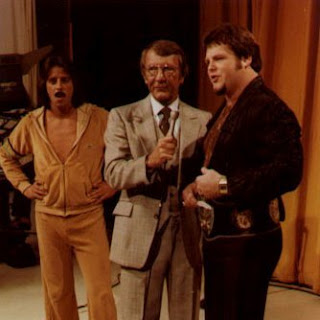 I went to a Comics Expo in Memphis two summers ago where I got to meet Joe Casey, Kyle Baker, Cullen Bunn and some others. Jerry Lawler was there with his Batmobile from the old Adam West TV show. Near him was a little, older gentleman with a big smile on his face. Of all the people I met that day - heroes and inspirations alike - none were as sweet and kind as Lance Russell.

He was the voice of Memphis wrestling. When the insanity hit - as it often did in Memphis-style wrestling - his was the voice of calm reason. Almost comically so when contrasted with the fireballs, celebrities, monsters, and riots that took place in the Mid-South Coliseum every Monday night.

Often unheralded even in his own field, Lance Russell is one of the greatest wrestling announcers there ever was. All of the greats still alive today would agree with that. While 91 is a heck of along and full life, it's made sadder that he passed away just a few days after his own daughter's death. Heartbreak is that poweful.

I know he's rejoined his daughter now. Just like I know he's calling the greatest matches Heaven can book. Rest in piece, Lance Russell.
at 10:04:00 AM