That's probably a little heavier sounding of a title than I mean for it to be. I was stuck for a good title. That's what came out, alas.

In one fell swoop, I have now completed two long-standing X-Men titles: X-Factor and Excalibur. That brings the count of completed ongoings to four (New Mutants and Dazzler being the others - I still haven't gotten around to Alpha Flight volumes 1 or 2, nor finishing Maverick and apparently didn't know Bishop: The Last X-Man was meant to have been started). New Mutants was a core title, as was X-Factor. To a degree, Excalibur was, or at least it was moreso than Alpha Flight or Deadpool.

The three expatriates from the X-Men - Nightcrawler, Shadowcat, and Colossus - mosey on back to the X-Men proper. Kitty and Kurt hadn't been official X-Men since their injuries during Mutant Massacre. Colossus hadn't been since he joined Magneto during Fatal Attractions after his sister Illyana's death. Wolfsbane moved on with Douglock to the Warlock comic when Marvel launched their strange M-Tech line of comics, Captain Britain and Meggan don't do much for a while, Pete Wisdom will join up with X-Force once Warren Ellis comes in for his strange editor-authorship of three of the X-titles, and Rachel is still lost in the time stream. 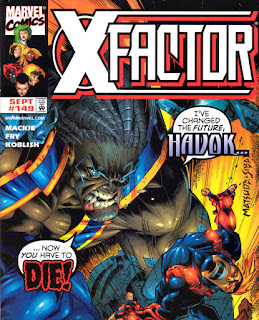 Over in X-Factor, Havok died. That's where that left off. Huh. Forge returns to the background of the X-books, as does Madrox, no idea what happens to Shard the living hologram but Bishop has a series coming up so may there(?), and the other people from her future kind of disappear as well. Polaris also seemingly returns to the background along with Strong Guy and Valerie Cooper. I sure as hell forgot what happened to Wildchild.

X-Factor is replaced with Mutant X, wherein Havok is not actually dead but is thrust into a gothic What If-type world. Which makes me wonder if this was the first time Marvel ever had an ongoing set in another universe. I mean besides What If... which was a new universe every issue. Interesting.

Excalibur is replaced with...well...Gambit's first ongoing I guess. The expansion of the X-line in the 90s was one of consistent bloat, but at least it happened gradually. Once we get to the Jemas-Quesada era it's like force feeding feed to geese. Seriously, on my X-Men reading map-list-thing I'm on page 43 of 130 pages and I've read the majority of the X-Men comics from 1963 to 1998 now. Post 2000, there's a LOT of effing X-Men in my future.

I'll get my thoughts on X-Factor out of the way first. It wasn't my fave ending. First off it ended on #149. They couldn't hold out to make it end at an even 150? Weird. Then, the only real way you knew it ended was because an announcement in the letters column stated that if you had a subscription to X-Factor, then the remaining issues you had left coming to you would be replaced with X-Men issues. No announcement of Mutant X, no 'thank you's', nothing. And then the issue is about Havok trying to pull what was left of any version of the team together to make a new X-Factor. Ish. See, X-Factor had long since dissapated. For the past 25 or 30 issues of this comic, it has jumped between the few members of the government X-Factor team barely holding it together, then Havok's Brotherhood team, and then the three time-jumping mutants from Shard and Bishop's timeline. It was a strange comic there at the end. And I don't feel like the end fully represented anything about any incarnation of this series. On that end, after 149 issues, 9 annuals, and a graphic novel the final issue was a disappointment.

Excalibur came a lot further to what one would hope a series could end like. It even comes with a cover by series creator Alan Davis. And it ends on a sort of good number to end a series on at 125. This was the era when Marvel would have a special issue for every 25th issue of a given title, making them double-sized and 'special.' Hell, they celebrated 35th anniversaries like that was a meaningful number. I remember them even doing 12th issue celebrations like "Look! We made it an entire year with this series without cancellation! But it's canceled next month, sorry." 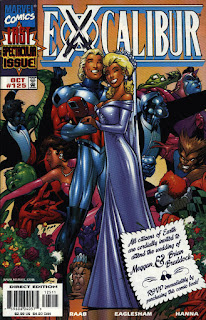 So Meggan and Captain Britain at long last get married after quite a long courtship honestly. Just a few years after Cyclops and Jean Grey, though they were on and off since the 60s. Or clones. Or cosmic demigods. Or time travelers. Or alternate world enemies. Or...

So Meggan and Captain Britain at long last get married. Writer Ben Raab uses this opportunity (much like Stan and Jack did way back when) to bring in a bevy of characters from across the, well, multiverse in this case. Old teammates, supporting cast who'd left, characters from other books, and probably a Marvel creator or two (though I admit I really wasn't looking for them - shame on me) appear. Some plot bows are tied, others are untied and then re-tied. There's some great meta jokes, especially the last page where Roma and Merlyn question how the other could allow Excalibur to end when there is still evil afoot and prophecies and what not. This was a fun, lighthearted issue harkening back to the original tone under Chris Claremont and Davis in a great homage to their style. I came to appreciate Raab's run on this book more than I thought I would. This was a really good finale to 125 issues, two annuals, and something like six graphic novels or one-shots.

So there we have it. Overall I'd say X-Factor was my favorite series of the two. I absolutely love the original five X-Men era all the way till the end. Peter David's run was wonderful and made me realize how great the lower tier X-characters could be under the right creative team. He'd come back to those characters later on in another X-Factor series that went almost as long as the original series.

Excalibur had great runs under Claremont and Davis (twice for him). Warren Ellis had an interesting run that was nowhere near as cynical or dark as I'd expected. I think my reading of the AoA series X-Calibre shaded my approach to his run. Ellis' Pete Wisdom character was a fun addition, even with the creepy relationship he had with Kitty (she was meant to still be a teenage here, but Ellis wasn't aware of that at the time thinking she was college age - blame the editors).  There has never been a real reunion of these characters despite there being a couple more series under this title. Claremont even helmed some of those. Most recently it's looking like there will be a reunion in the X-Men Gold annual complete with Alan Davis cover homaging the very first issue of Excalibur. And Meggan is carrying a baby! Whoo-hoo! Baby Britain! 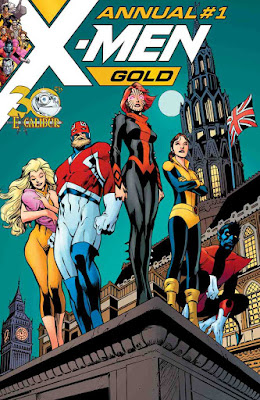