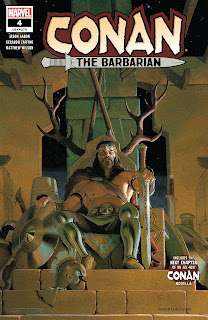 In 2018 the publishing rights for the character Conan the Barbarian was returned to Marvel Comics after a long stint at Dark Horse Comics. Marvel published Conan comics from the 1970s through the 1990s before the rights were sold to Dark Horse. Conan’s popularity has sustained for almost a century, therefore Marvel knew that the acquisition of Conan had to be accompanied with a powerhouse book to please fans. The books that have resulted from this transaction are an absolute treat for any fan of the most famous barbarian in history. Prior to 2018, Dark Horse produced many quality Conan storylines and titles. With Conan the Barbarian and its accompanying titles, Marvel has matched if not exceeded expectations.

Conan has endured as a popular hero because he views the world in black and white terms: evil must be punished (severely) and good must be protected. Conan is an anti-hero in that he is a murderer and a thief, and yet he is the hero because, in the end, he always makes the choice of the greater good while protecting the defenseless.

The first issue opened with the briefest of introductions to the character. Page one depicted Conan’s hectic birth as his mother’s village is being raided by invaders, and the second page portrayed King Conan seated on his throne. The first two pages of issue one demonstrated the scope of the forthcoming story: this would not be a linear tale of Conan’s life, but a story that is told from different points in Conan’s journey to his own death. On the third page, we find a young, battle-worn Conan fighting a horde of warriors for money. A beautiful woman watches nearby, taking great interest in the Cimmerian. Taking advantage of his weakness for the opposite sex, the woman seduced Conan and lured him away from the public eye. In private, she is revealed to be an ancient witch who sought to sacrifice a great warrior to her god, Razazel. Conan managed to kill the witch and escape from her nefarious trap. Flash-forward decades later, and King Conan encountered the same witch and her offspring who announce that Conan’s fate is to be sacrificed to their god. The cliff-hanger ending of issue one is continued at the end of every subsequent book, implying that Conan’s death is inescapable.

In Issue #2, Conan fought alongside an army of Picts (a fictional aboriginal tribe) against a swarm of giant snakes, unaware that the Red Witch’s children were watching from afar. The third book told the story of a seventeen-year-old Conan who was imprisoned and waiting to be executed in the Nemedian border town of Red Tree Hill. Guilty of stealing gold from the local townspeople, Conan had no right to plead for pardon and yet fate spared him of his sentence. In Issue #5 Conan is stranded at sea, facing an onslaught of sea monsters, and in #6 Conan is appointed the commander of a king’s army in need of a bold leader. Through each adventure, for what appears to be most of Conan’s life, the Red Witch and her children lie in wait.

In the previous paragraph, I purposefully skipped Issue #4 so that I could draw special attention to this comic. I’ve been reading Conan comics for most of my life and have loved the character since I watched the Arnold Schwarzenegger movies with my father as a youngster. This comic is quite possibly my favorite Conan story ever. Jason Aaron wrote a story in which Conan the Barbarian became a vigilante hero. Conan is frustrated and stifled by his role as a king. What used to be his greatest aspiration has now become a disappointment due the monotony of ruling a kingdom. In a desperate attempt to relive his days as a vagabond defender, Conan disguises himself and slips away in the night to punish evildoers in his kingdom’s streets. But even then, Conan’s fate is being influenced by the Red Witch.

Conan lives in a world where a myriad of gods exists. However, Conan stands out among his contemporaries as a monotheist in that Conan believes in a single god, Crom. Conan pronounces his allegiance to Crom while also cursing him as an absent, impetuous deity. In life, we can sometimes feel like God is not there for us - like God is distant. However, we must remember that, unlike Crom, God is ever-present in our lives and is always in pursuit of his creation: us. In Psalm 23:4 and Deuteronomy 31:6, God promises his people that he will never leave them; that he will always be by our side.

In the same way, just as God pursues his people, another stalks mankind in an effort to keep them from knowing God. The Bible describes Satan as a roaring lion who hunts his prey, seeking to devour them (1 Peter 5:8). In this story, Conan is stalked by the evil Red Witch who seeks Conan’s demise. Throughout his life, this evil presence has been in the shadows watching and waiting for the perfect time to strike. In the same way, the devil waits for a moment of weakness to put temptation in our way and ruin us. Unlike Conan, we have awareness of this threat and we can defend against it. As 1 Peter 5:8 also says, be on your guard. Moreover, we have a God that is not absent but acts in our defense and who offers his power to defeat our adversary (Ephesians 6:10-17).

Bottom line: Conan the Barbarian is a fun adventure across a vast timeline. This book is certainly not appropriate for a young audience, but will absolutely thrill fans of the character and the genre. The writing and art are top-notch, setting a high bar for future Conan titles. Amazingly, each of these six issues could be read as a singular story without previous knowledge of the ongoing storyline. But I purport that any reader who picked up an issue of this story would want to read the rest of the run.