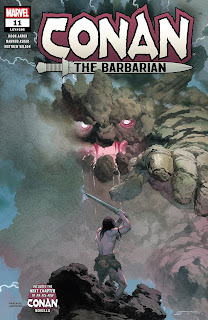 Marvel’s acquisition of Conan the Barbarian has been beneficial for the character and Jason Aaron’s story has been buzzing around comic book fan-boy circles for over a year. Riding the coat-tails of the popularity of the Conan: Exiles video game, this relaunch of a titular comic book character landed on the table of the pop-culture consciousness at the perfect opportunity. Fans of the character had high expectations of Marvel Comics when they acquired the character rights in 2018 and now, it is safe to say, Marvel has delivered with gusto.

Issue #7 continues as the previous six, opening to a brothel in a gloomy, archaic setting where a bearded and sullen Conan has entered with a hidden purpose. As with previous stories in this series, no information as to the year of Conan’s life in which this tale unfolds is provided - the main character’s age can only be guessed by his scars. As the procurer of the brothel presents five women to Conan and asks which he prefers, the barbarian responds, “I’ll take them all.” In a world where slavery is a reality, the purchase of men or women is commonplace. Still, one wonders why Conan would want to buy five women from a brothel, and so did those whom he had purchased. Afraid that their new owner wished them harm the women prepared to defend themselves, but were shocked when he saved them from a pack of wild wolves. It was then that Conan shared with the women that he was on a mission to take down a pirate who had a foible for women, and they were Conan’s key to get close to him. After serving their purpose, Conan awarded each woman with their freedom. The end of this issue holds an important clue that will be evident in the story’s conclusion in issue #12, recounting Conan’s former and future lovers.

The eighth issue finds Conan returning to the place of his birth, the home of his only living relative, his grandmother. As Conan draws closer to the snowy Cimmerian village, he is filled with dread and overcome by a feeling that something is amiss. After being welcomed into the home of man Conan had known since he was boy, the man turns and attacks Conan in a rage. Escaping the house Conan is shocked to find that the entire village has been put under a spell by the abominable Thoth-Amon - a nefarious wizard whom Conan foiled on numerous occasions. It can be assumed that this was not Conan’s first encounter with Thoth-Amon, given that Conan identifies the culprit right away by his observation of the use of snakes to hypnotize and possess the villagers. Conan’s grandmother and the others are restored to their own cognizance while Conan receives his anticipated warm welcome. Meanwhile, Thoth-Amon, far away in his tower in Stygia, has a vision of Conan’s death, not by his own hand, but by those of the children of the Crimson Witch.
In issues #9 Conan awakes in a strange place, guided by a nameless host, as he faces a slew of monsters and obstacles in an attempt to rescue a people that have been trapped there for years. In this issue, monsters from throughout Conan’s history are featured, including the mirror-monster from the Schwarzenegger film, Conan the Conqueror, and the ice giants from Conan: Exiles. After rescuing the people and his host from the belly of “the god below”, his guide reveals the name of Conan’s murderer, Razazel, stating, “…it will be the last name you ever hear.”

**SPOILER ALERT**
The following paragraphs contain major spoilers concerning the conclusion of this storyline. Do not read any further if you wish to remain spoiler-free. 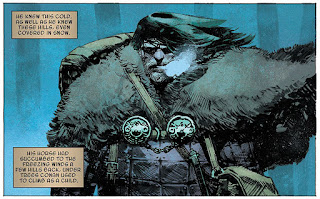 Issue #10 begins the narrative that we have all been waiting for. The children of the Red Witch make their move and manage to capture King Conan, revealing that they have been following Conan, biding them time for decades, and waiting for the moment when Conan was weak and vulnerable enough to be overtaken. The Red Witch had required the blood of a great warrior to revive the blood-god Razazel and, at long last, Conan was to be sacrificed so that Razazel may rise. But Conan would not be dispatched without a fight. Despite his valiant effort to defeat the witch and her children, Conan was drained of enough blood to arouse the blood-god and, as promised, Conan died.

In the next issue, Conan entered the afterlife, though he is unaware at first. As Conan climbs a mysterious mountain his life is recounted with each new height. At the summit, Conan finds an audience with Crom, the god whom he had followed his entire life, and learns that he, himself, is dead. Conan finds it laughable that, after all his exploits, adventures, and victories, his demise came by the hand of a feeble witch and her blonde, twin children. Speaking face to face with his god, Conan pleads his case not from a position of begging rather accusing Crom of being a worthless, absent god who does not honor his subjects despite their devotion. Even in the face of a god, Conan is a fighter. Crom, understandably, lashes out at the puny Conan, enraged by his insolence. But Conan will not settle with being dismissed. Conan argues that he has lived his entire life devoted to Crom, carrying his name to distant lands, declaring his victories in Crom’s name, all the while never praying to ask his god for anything, and this is what he earns? Death at the hands of a witch. And furthermore, someone has to stop Razazel and Conan is the only man who can do it. Crom is angered by Conan’s rebuttal but can not deny that his subject has a valid argument. Crom agrees to send Conan back to the land of the living to defeat Razazel but also promises that his next death will be gradual and more painful, that he will die alone and downtrodden, and that his next trip to the afterlife will not be as pleasant as this one. Back in the land of the living, the children of the Red Witch are just beginning to celebrate their victory when the fallen body of Conan stands.

The final issue of “The Life & Death of Conan” finds a newly resurrected Conan the Barbarian King fighting for his life and the destruction of the blood-god, Razazel. In the face of such opposition, the newly powerful twins and the blood-god plus an army of undead warriors, Conan is severely outnumbered - he is losing. But help arrives from an unexpected means. The seventh issue of the series told of Conan’s two loves: the love of his young life (presumably the pirate queen, Belít, according to past Conan lore), and the love of his later life which produced Conan a son. Followed by a brigade of soldiers ready to fight beside their king, Conn, the son of Conan, descends the stairs into the gloomy, battle-stricken dungeon. Aided by the prince and his army, King Conan defeated the twins and their undead army. Because it was Conan’s blood that awoke the blood-god, he alone has the power to defeat the beast and send him back to the nether-world. After doing just that, Conan and his son ride into the sunset, looking forward to their next adventure. 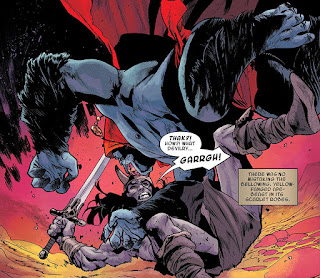 In this highly anticipated climax to the storyline, Conan becomes the obvious Christological metaphor (not suggesting that this was the author’s intention): an evil has been unleashed upon the world that can only be defeated by the resurrected hero who is willing to sacrifice himself that the innocent may be protected. Hebrews 9:22 says that there is no forgiveness without the shedding of blood, and 1 John 1:7 says that Jesus’s blood purifies us from sin. Jesus died on the cross but was resurrected three days later and it is by his shed blood that sin is defeated and we can have a relationship with God, our creator. Just as Jesus was willing to die on the cross for those who would follow him and be saved (Philippians 2:8), Conan put his own life on the line to save the world.

In his interaction with Crom, Conan metaphorically represents many modern attitudes towards the Christian God. Many who deny the existence of God do so based on God’s perceived lack of benevolence - on their perception that God does not help his people, so he must not be real. Or, if God is real, he does not care about his creation. These are the claims that Conan states of his god, Crom. Even Christians, those who believe in God, often claim that God seems distant, that he is uninvolved in their life. In the Bible, King David asked this same question in Psalm 10:1 saying, “Lord, why do you stand so far away? Why do you hide in times of trouble?” David, a man after God’s own heart, at times felt that God seemed far away. The first important distinction is that this feeling happens to the best of us. There are times where God will feel distant, and that is OK. It doesn’t mean that he is not there. What is paramount to note is that David wrote this Psalm in a time of disobedience - a time where he had strayed away from following God. Take a moment to read Psalm 18 and you will find David in a completely different state, celebrating the overwhelming presence of God in his life. The book of Romans tells us that sin separates us from God (Romans 1:18-25, 3:23). If God seems distant, it is because we are not pursuing him with our whole selves. If God seems absent, it is because we have sin in our lives that is separating us from him. God hasn’t moved, we have. When God seems distant we must draw closer to him, not the other way around.

Bottom line: The conclusion of this storyline is thrilling and engaging. Conan the Barbarian is not appropriate for younger audiences but is sure to enthrall fans of the character and the genre.  Like the preceding issues, writing and art are top-shelf. Also, like issues 1-6, issues 7-9 could be read as stand-alone stories, however, I purport that the prologue endings would cause curious minds to explore the whole story.